I have been reflecting a lot lately on why I have chosen the path of becoming an art teacher. The spring semester started last week for me, and I thought I would share this story and its enormity of how I feel it has affected us in our society. I began an Art Education course with a professor asking the class “What was the inspiring moment that made you decide to become a teacher?” Well, I can say for sure that it didn’t happen in a classroom, but rather a night out in a bar.

A friend and I were out for good drinks and good food when a group of young gentlemen started talking to us. We were talking about art, as we were both potters, when these young men starting chatting with us. Somewhere along the conversation one asked what we do, and we responded of course saying we were artists, in particular, potters. Immediately it was asked if we had ever reenacted the scene from the movie “Ghost” ( if I had a dollar every time that happened…). Their laughter prevailed to then again ask us what we really did for work. I went home that night irritated at their gall, and angry at their jokes and insults.

Now, it took a while for this experience to sink in, and honestly, I still think of this incident and simmer. I get upset that those men did not take the Arts seriously, that they don’t appreciate it for its possibilities. More so I feel that this is the general view in America, that the Arts are not valued and have no place of importance. People stereotype artists as people who don’t want to hold a job, that they must be the classical “starving artist”.

Vase, soda fired stoneware. There is no such thing as “good” or “bad” art, only the illusion of politically correct.

This brings me back to those young men I met that fateful night. I realized later that their views were not just in poor taste, but rather that it is a perfect example of our school system’s poor education in art! If they had been taught to appreciate art more at the primary level they would have more respect for its creators.

Art education isn’t about pumping out parent pleasing artwork in the classroom. It is about changing children’s perspectives and opening their minds to the world of art. In a world focused on fast thrills and better upgrades people don’t slow down and appreciate beauty. I feel that we can change this beginning in an art room that focuses on experiences not who is “good” or “bad” at making art.

Self Portrait #1, Intaglio, 8″ by 10″. Being unable to see the eyes in a portrait makes it more haunting, but what is more frightening are those who look but do not see.

I want to change people’s perspectives. I want to be that teacher that blows your mind with artwork. I want to teach children appreciation for the arts so that there is more draw for local artists and their wares. I want the arts to flourish, and that means teaching the love for it. Imagine changing the local economy by just changing our views about art.

For the longest time I have wanted to start a blog. Unfortunately, life had swept me downstream, but I finally feel like I have gotten my bearings and can begin a new chapter in my life. Pottery is everything to me; it saved me in a time of great illness, and has calmed me when things have gotten stressful. I am grateful though to have a supportive family and lucky to have found my passion in my art. I feel like most people these days never get to discover a hobby that they can connect to and feel strongly about. For me ceramics is more than a hobby, and honestly, I cannot fathom a life without pottery in it.

This brings me to a new fear that has surfaced recently for me. If you work with your hands, if it be with clay, wood, or charcoal, your greatest fear would be losing the function of your hands and the capabilitiy to express yourself with them. I consider it a scary campfire story, thinking about an artist who is unable to create because of an inability to move their hands. My hands are special, they are important, they are essential to my business. Losing them would be like losing my ability to speak and communicate my views. So getting a diagnosis of psoriatic arthritis at 25 years old is a frightening thought. Having this become a reality has been gut wrenching, and all I can do is wonder, how much time do I have left to use them properly?

Perhaps I am over thinking this. Maybe it won’t be as bad as I envision. I am currently in school to become an art teacher, so even if I lose my hands I will still have my voice to teach children. Still, I am facing a fear only an artist could truly feel for, the inability to create art that moves the world. I know what I need to do, what I want to do next. I will make artwork that will move me, will motivate me, and I will create things as if the world around me is falling apart. Through blood and sweat I will continue until the end. I am motivated beyond belief; I will win this battle some way or another. I’m not talking about desperation, but a great need to express what only I see and imagine. Making my thoughts into reality brings such satisfaction for me, and somehow I need to continue that.

I believe that with whatever happens in the future I will be able to work around it. My family’s motto is to “take it one day at a time”, and for us it really is important since auto immune diseases are common in my family. This diagnosis wasn’t out of the blue for me, and I know that I will roll with the punches. Life moves on if you like it or not, and I feel that if need be I will be modifying how I create my art so I can work. I guess the reason I write all of this is to make you aware of the value of your body, of the weight of an artist’s hands. Most importantly, for any artists out there, do not take for granted the power your hands have. 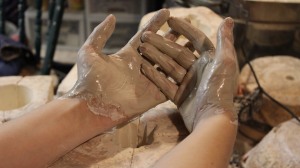